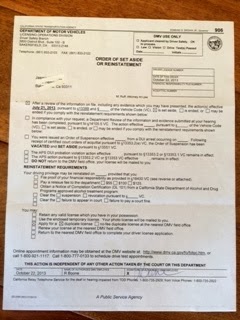 Earlier this month Matthew Ruff obtained a set aside on an under age 21 DUI out of Kern County.  The attorney established that although the officer swore under oath that the accused was driving under the influence and had a .09%BAC, well above the zero tolerance standard allowed for under 21 drivers, he got the DMV to dismiss and set aside the action on evidentiary issues related to the case.  For those that have never seen what a "set aside" letter looks like, we have attached the actual order.  The driver gets her license back with no scar on her record.

These types of wins are difficult to obtain in zero tolerance cases where the DMV deems any level of alcohol to be sufficient to suspend a licnse.  In this particular case, Matthew was able to establish that although the client did have a .09 in her blood at the time of arrest, that was not her blood alcohol level at the time she may have been driving her car.  The hearing Judge took testimony from the arresting officer and in rebuttal the attorney called two witnesses that were present in the car with the respondent at the time she was contacted by the police.